A Bit of History

Eddy Jones built this traditional Maine sporting camp with help from families in this area. Additionally, we have learned that Eddy started out with one cabin and just kept adding cabins each year. In one of his brochures, Eddy wrote, "These camps were started in 1945 after a ten year search for the ideal location. I have been a trapper and guide for fourteen years in wilderness Maine. I know what really good fishing is, and what it means to others." (We have been told many times that this camp has the best location in the area.)

In 1961 Eddy sold the camps to the Hurds, but in his semi-retirement he stayed on as a guide and lived with his wife, Leona, in a cabin he built in Rolfe Cove. After Stan Hurd, there were three other passings of ownership. In 1997, Sandra Smith and Ian Clements purchased the camps and although it was a hard choice, they sold the camps in November of 2004 to us, Steve and Lin Whitman.

I had been fishing and hunting this area since 1971 and always had a great affection for this part of Maine. However, we both knew that the camp needed a lot of updating and improvements to bring it back to the "Eddy Jones Era". Today, our facilities now provide the experience of a traditional Maine Sporting Camp. A newly renovated lodge, cabins, water and sewer system, docking facilities, guest laundry, tackle shop and Guide Services are just some of the improvements that have been established. Our camp now brings that special opportunity to "step back in time" and experience what life used to be during the "Jones Era". 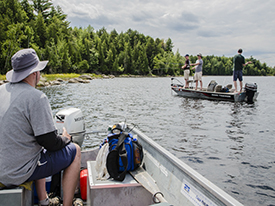